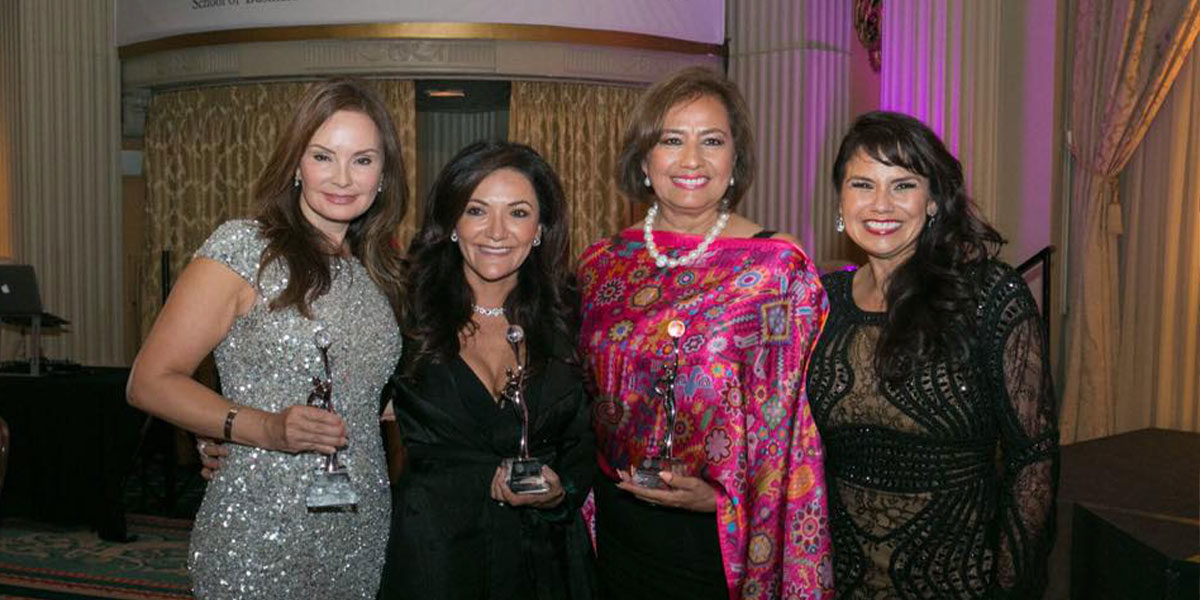 As I continue to discuss courage, it’s important to remember that harnessing courage is how we trust in ourselves and take control of our lives. That includes using our courage to overcome nerves and approach role models because you really never know where that will lead you.

I often say, “Surround yourself with people who truly want to see you succeed,” but it’s just as imperative to surround yourself with people you admire who share your same values. They push us to take the high road and pursue the path of truth when we’re tested. At the end of the day, if you set your sights high, then you’ll do high-minded things.

One of my favorite stories about harnessing courage like this happened in 2001 when I attended the United States Hispanic Chamber of Commerce (USHCC) annual Convention as a young entrepreneur. I went looking for information and inspiration. At a Latina luncheon, I sat in the back of a room filled with 2,000 people to hear a speech given by Rosario Marin, the 41st Treasurer of the United States, which has stuck with me to this day. I can almost close my eyes and envision her in her St. John blazer with the beautiful gold buttons.

Rosario, who was born in Mexico, was the first immigrant to hold that position and has held many other positions of authority where she was the first Latina. To see a cabinet level Latina working for the president of the United States, I was wide-eyed.

It was incredibly inspiring so a moment after the speech, I jumped up out of my chair, mustered up my courage, and ran to the back of the stage, where security stopped me. One of the guys said, “Ma’am, you cannot go past this area,” and I looked at the guy and I said, “I’m a Latina – I can do anything!” So, I skirted him, got myself on stage, and came face to face with Rosario. I reached out my hand and said, “Madam Treasurer, my name is Nina Vaca. You don’t know me, but I raise money for Hispanic students in Dallas, Texas and you have truly moved me today. I’m hoping that you will come to Dallas and do the same for my students, who so desperately need your message.”

Rosario paused. (Meanwhile, I was dying inside.)

She looked me up and down, and said matter-of-factly, “Do you have a card?”

Well, I’m happy to share that she came to Dallas, where she inspired hundreds of students in the Stars on the Rise Scholarship Program, an initiative of the Greater Dallas Hispanic Chamber of Commerce, where I served as chairman. I’m also proud to say, that the Chamber’s little gala where Rosario spoke now raises $4 million for Hispanic students thanks to the leadership of Michele Bobadilla and others who chaired the movement.

Over the years, I’ve been blessed to form a friendship with Rosario. Her example and support has served as a guide for me, a challenge to be the best version of myself and to use my platform to give voice to the voiceless, just as she’s done.

Four months ago, I had an experience with Rosario that was meaningful beyond measure. I was honored beside her, as well as Rosie Rios, the 43rd Treasurer of the United States and another mentor of mine, at an awards ceremony in Los Angeles hosted by the Latina Global Executive Leadership & Entrepreneur Institute in partnership with the USC Marshall School of Business. Rosario and Rosie are living, breathing examples of what is possible in America.

It’s worth noting that it took me 16 years to share the stage with them. Standing together, I thought back to my first encounter with Rosario when I easily could have given into my fears and left the event, never striking up a conversation or making an effort to get to know her. Instead, I reached out, striving to be more like Rosario, and I’m so glad I did.

The lesson to take away is never underestimate the power of how you make people feel, and always have the courage to stand up, reach out, and ask someone to support you.

By emulating those we admire, we have the opportunity to follow in their footsteps. If you can begin to see yourself in others and how they persevered to get to where they are, you begin to think about what you can achieve. That’s why it’s paramount that women support women. I’ve witnessed it all my life and few things are as powerful.

Rosario has said it herself while discussing how success breeds success: “For me, the most important thing is that I will be a Latina that will be successful so that in turn when I leave, the doors are kept and remain open for other Latinas to follow.”

But we shouldn’t just follow, we should gather our courage and develop lasting relationships with our role models so we can eventually become role models for others.

Remember: Courage is what it takes to grow.