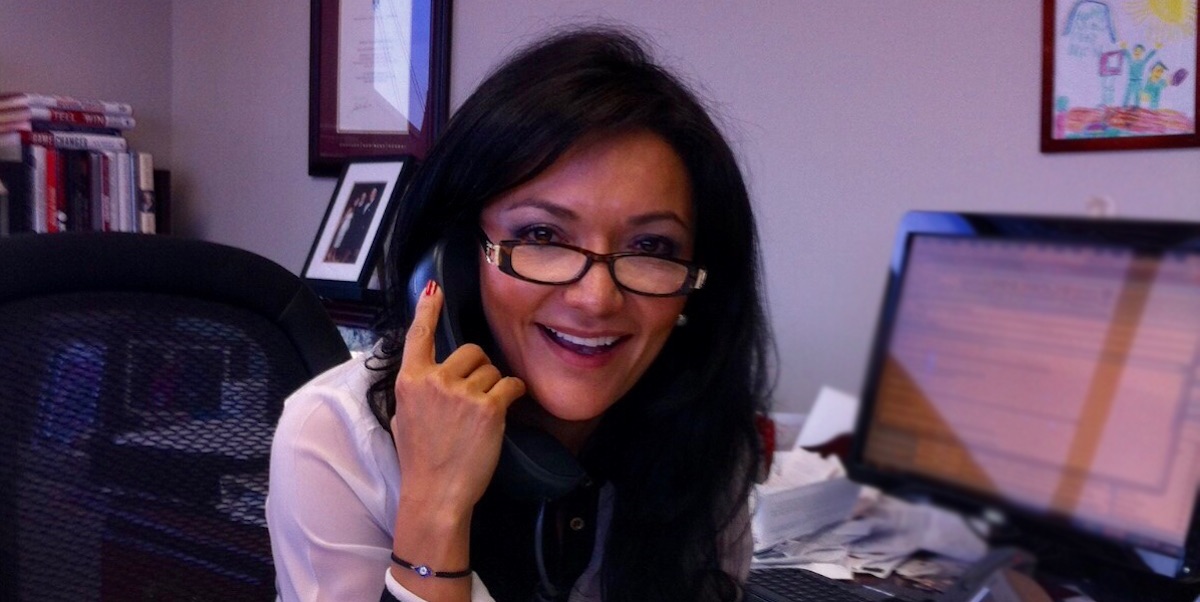 You can read things all over the internet that promise you “hacks” to success or some kind of secret formula. Let me state this very clearly: there is no hack to success. It takes hard work, dedication, some good fortune, and a great team of people around you to be successful. Here at Pinnacle Group, we have a saying that “it took 23 years for us to become an overnight sensation.” Another saying that I fully embrace is: “The harder I work, the luckier I get!”

However, I will tell you that I’ve noticed one thing in more than two decades of business experience that the vast majority people don’t do. If you can consistently do this one thing, you’ll set yourself apart from the competition.

There have been so many times when I offered someone an interview, connected them with someone else, gave them an opportunity to attend an important event, or did a favor, and I never received as much as a simple follow-up email. However, when such an email comes, it can be life-changing both for the person following through and for Pinnacle.

Fire in the Belly

Pinnacle Group has a lot of traditions. One of them is bringing as many of our associates together at kickoff events throughout the year as possible. This is a time for us to celebrate big wins, recognize each other for a job well done, and to tell the stories that define Pinnacle’s culture and demonstrate our values. Last week, we came together, and, in honor of one of our associates’ 16-year anniversary with the company, I told the story of how we met, and how he came to become part of Pinnacle.

He and I met when I was seated next to him on a plane to Dallas. He was a young man and full of energy. So. much. energy. As I remember it, he talked my ear off! He started off by joking: “I hope you can chat for a while because this is a three-hour flight!”

As it turned out, I was upgraded before the flight took off, so we only ended up talking for about 10 minutes. In his words, we talked long enough to hold my interest, but not long enough to become annoying. But in those few minutes I learned so much about him.

He was 23 years old and flying to Dallas with no job and no clue what he was going to do next. All he knew was that the girl of his dreams was moving there, so he was too. My impression of him was that he wasn’t afraid to take risks, he was able to strike up a conversation with a stranger, and he was open to new opportunities. Being in the employment business and always looking for people with an entrepreneurial spirit, which I call “fire in the belly,” I gave him my business card as I moved seats.

When the flight landed, I went to baggage claim to grab my suitcase and there he was again. He came up to me and thanked me again for giving him my card. Sensing that someone with his fearlessness might be a good fit for a role at Pinnacle, I decided to give him a chance to earn an interview. I told him to follow up with me via email, and we would see if there was an opportunity for which we could consider him.

Over the years, I’ve given hundreds of people my card and the same opportunity, but only a small fraction actually does anything with it. Whether it’s because they don’t think the opportunity is real, they lose the card, they expect me to follow up with them, or they aren’t interested in trying something new, most people never follow through. And guess what — they are not our people.

This was different. He followed through with the email right away, demonstrating what I suspected — he was hungry and had fire in his belly. Now I knew that he would also follow through when given an opportunity. I connected him with team who handled our hiring process at that time, and he continued following through every step of the way. And 16 years later, we can say that the rest is history!

Oh, and he’s been married to the girl of his dreams for 13 years, and they have four children together.

Often, the most important step you can take toward your goals is as simple as following through on a connection or lead. It only takes a moment but can dramatically alter your opportunities and outcomes. So, why not follow through?

Not every example is as obvious as the one above but that doesn’t mean you shouldn’t follow through every single time. Sometimes, you won’t see a reward for your efforts for years or even decades. But each time you follow up with people you’ve met, you’re making deposits in the bank of relationships, and more often than not, they have a way of coming back to you later on and greatly enhancing your life.

One of the most important practices that I maintain to this day is the importance of the personal touch. Whether that’s a thank you note, a thoughtful email or text, or a phone call, staying in contact with people you connect with is key if you want to succeed in business.

If I meet someone and get their business card, I try to send an email within the next few days to reconnect and make sure they have my contact information. This can be as simple as telling them it was nice to meet them and that it would be great to stay in contact. This is a simple message, there is no ask involved or any other action steps. It’s just a way to open up a line of communication for the future. Once contact is established, it’s important to reach out in some way at least a couple of times per year to keep the connection going. Reasons to reach out can include sharing an article or video that may be of interest to them based on your knowledge of their business, noticing that they were recognized for an achievement, attending the same industry or community event, connecting with someone else who they know, sharing an opportunity, requesting an opportunity if you know one is available, etc.

That said, it’s also important to be respectful of other people’s time, so I wouldn’t recommend doing this more than twice a year, especially if that person is in a much more powerful position than you. For example, if you’re a recent college grad and the person is a CEO, you don’t want to overstep your bounds or be annoying (I’ve had more than a few of these over the years who feel it’s appropriate to reach out every week or two).

Emails are nice and practical and often serve the best purpose, but there’s very little that is more effective than a hand-written note. If you have someone’s address and you can write them a personal thank you note, you will set yourself apart from the 99% of people who won’t go through the trouble to do that.

It doesn’t always have to be a thank you note either. Sending personal congratulations when someone wins an award, or a personalized birthday card also goes a long way in building relationships. The most important thing is to stay in touch with someone and to be nice with no expectation of anything in return. This is exactly what I mean when I talk about making deposits in the bank of relationships.

At Pinnacle we always stress the idea of putting goodness out into the world. We want all of our interactions with people to end on a positive note, even if that interaction is someone turning us down for business. There have been so many times in my career when someone who initially turned down our services came back to us years later because of their positive interactions with our team.

I’m a technology executive — if anyone is a fan of new technology and understands the importance of embracing the future, it’s me. But I also know that some “old-school” values still matter to this day. In fact, such things, like sending hand-written notes, matter even more as we become more reliant on our phones and computers.

Always be on the cutting edge when it comes to technology, always work on improving your skills but never forget the importance of following through in a personal way. Doing that can take you further than you ever thought you could go.

Often during conversations, especially at networking or other events, people make a lot of small commitments that they then forget about. It may be a promise to send someone an article you were discussing, or the name of a restaurant you discussed, or a referral to your hair stylist, or to introduce them to someone you know at a company where they want to work. Often, people forget about these commitments as soon as the conversation ends. This is a missed opportunity! If you committed to it during a conversation, you should keep your promise! It usually takes very little time, gives you a reason to reach out, and creates a positive impression of your willingness and ability to follow through. Moreover, it demonstrates you care. And what could be better than that?

So, tell me, what are some ways that you’ve followed through in your career and life? What are the personal touches that you find most valuable? Let me know in the comments below.