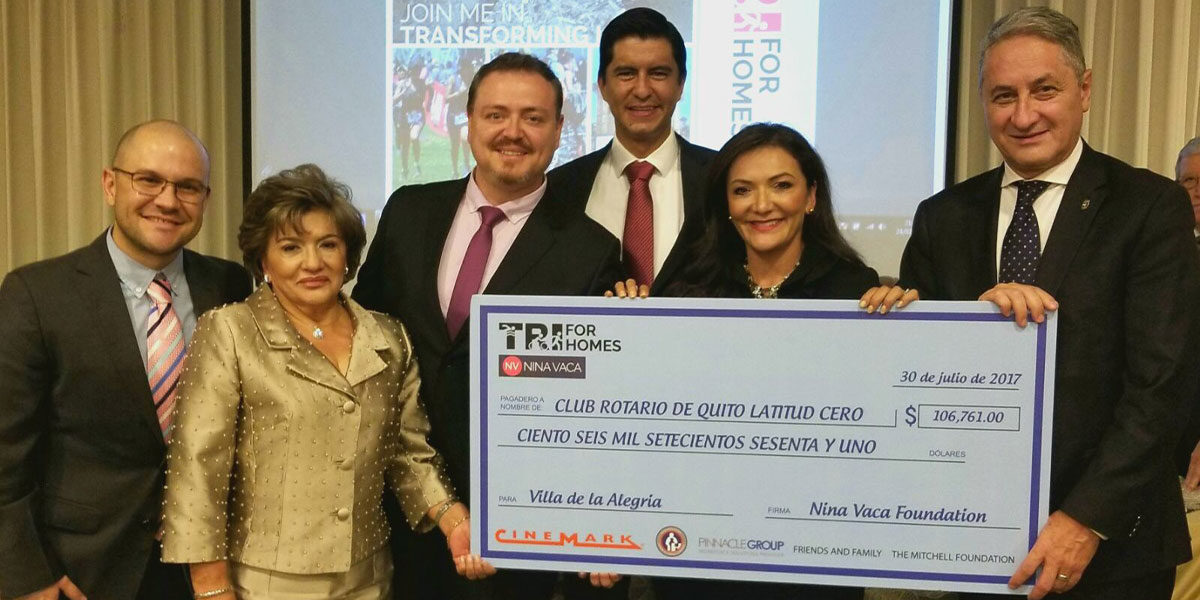 DALLAS, TX – July 25, 2017 – Pinnacle Group Chairman and CEO Nina Vaca will participate in the Ironman 70.3 in Manta, Ecuador on Sunday, July 30, 2017, to raise funds and awareness for victims of the 2016 earthquake in Ecuador, which left thousands homeless.  The race begins with a 1.2 mile swim in the Pacific Ocean, followed by a 56-mile bike course, and then finishes with a 13.1 mile half-marathon length run.

Vaca’s goal is to raise more than $105,000. The funds will be used to complete construction on the “Villa de la Alegría” (Village of Happiness), a 40-unit housing development for families left homeless by the earthquake being built in partnership with the local Rotary Club, Club Rotario de Quito Latitud Cero.

In 2016, Vaca raced in “Escape from Alcatraz” in order to help raise funds to rebuild businesses in devastated communities. After visiting Ecuador to hand deliver the $100,000 donation, Vaca realized she could do even more to help by building homes and founded the “TRI For Homes” campaign in June.

“I witnessed the grim reality of the earthquake’s impact with my own eyes.  Families are still homeless, with many being forced to live in tents,” said Vaca.  “I thought of my own children and how important having a safe home is to a family.  I realized that we can restore dignity and security back to these families by building homes.”

Although active fundraising efforts have been ongoing for only two short months, Vaca has been able to spread awareness broadly and recruit sponsors, donors and athletes to the “TRI For Homes” team from across the globe. She has also reached thousands of individuals through social networks and interviews with major news outlets.  On July 18, her efforts reached the floor of the United States House of Representatives.

“A year later, Ecuador continues to struggle with hundreds of families still living in tents,” said Florida’s 27th Congressional District Representative, Ileana Ros-Lehtinen. “I commend Nina for her determination to raise awareness and for building homes for Ecuadorian families. I wish her good luck and we will all be rooting for her.”

While Vaca has been the driving force behind “TRI For Homes,” her message and mission have attracted several sponsors, including Cinemark Holdings, Inc., which has agreed to match up to $60,000 of the funds raised to help build homes.  In addition, Cinemark has also used its unique ability to spread the word about this campaign by sharing the “TRI For Homes” mission on its movie screens across the region.

“I have 40 reasons to keep swimming, biking, and running, but no one does anything alone.  I’m incredibly grateful for the generosity of Cinemark, the USHCC, several family foundations, and hundreds of individual donors, including so many of my family, friends, and colleagues who have come together to make this campaign a success,” said Vaca.  “Together we will provide the homes these families need to build a secure future.”